The International Biscuit Festival is this weekend. If you have not already made plans to attend, you should. Just cancel whatever you had going on Saturday and get your hungry self to Knoxville. If you are already in Knoxville? Well, lucky you! Check out my festival tips from two years ago and head downtown on Saturday morning for some biscuit goodness! In honor of this weekend’s festival, I am posting my recap from last year. If you are on the fence about attending, perhaps this will change your mind.

It was almost a disaster. I bought my ticket and happily traipsed off, only to look down at my hand and realize in horror that I had somehow already lost the ticket. Not twenty yards from the booth! I felt like a little kid whose ice cream had rolled off the cone onto the ground. I must have looked like one, too, as M. went back to the booth and explained. The kind fest-worker peeled another ticket off of the stack and handed it to me. Whew. Disaster averted.

Humbled, we began again. Luckily, the previous day I had gone back and read my advice to festival goers from last year. One of the key pieces of advice was to arrive early. Tickets go on sale at 8:30 and they start serving biscuits at 9:00. Technically. But several started serving early, including Tupelo Honey, so we were able to get one of their large, fluffy, peach BBQ chicken topped masterpieces before a line really formed. 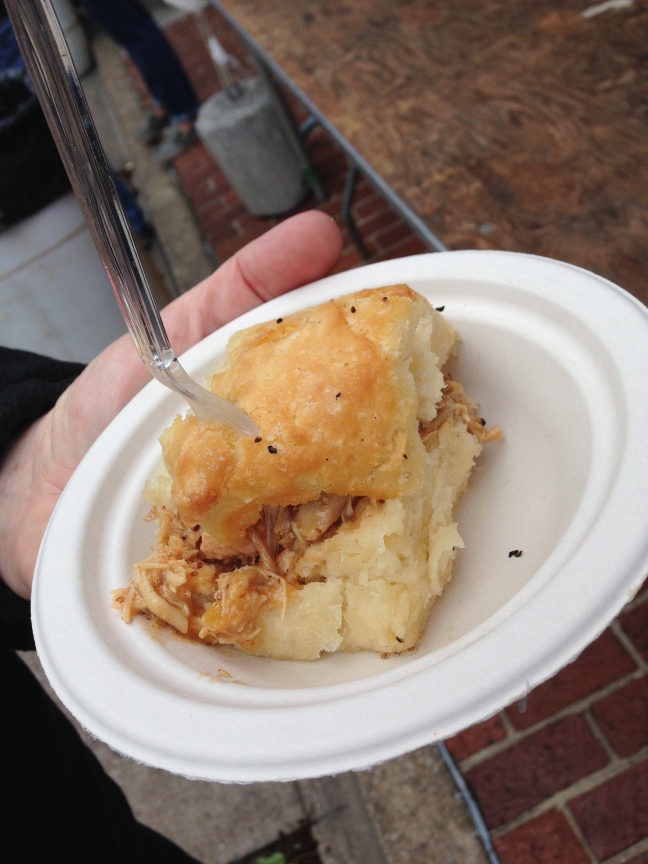 With a biscuit in our stomachs and a thimbleful of coffee (given away by one of the Biscuit Boulevard vendors), we were fortified and began sampling our way through the festival. 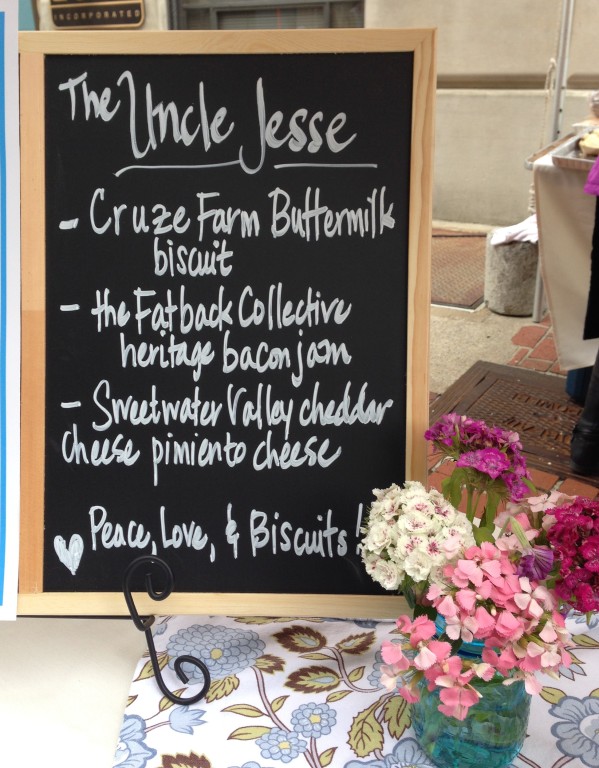 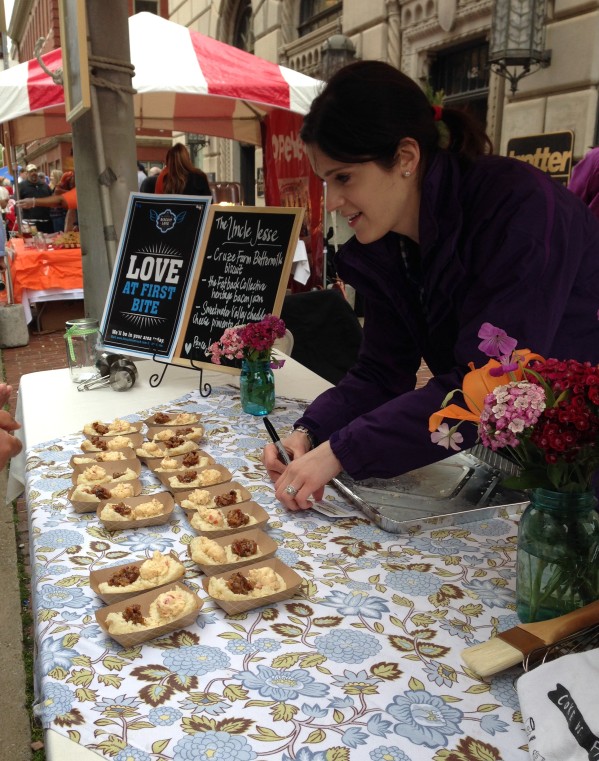 These were incredible – from Nashville-based Biscuit Love. That tomato jam. That pimento cheese. That biscuit.

After a few biscuits, we stopped eating the whole serving. We knew from last year that you can get very full very fast. It is kind of a waste, I know, but if you want to try a lot of biscuits, you need a strategy. There were a few that were smaller and we fully consumed those, and others were just so darn good that we ate every bite before realizing what we had done. We got a kick out of the couple we met in line who were filling up bags with their biscuit selections. They were going to take them home to enjoy in the peace and quiet.

We moved back and forth among the lines of booths until at some point we realized that we could not move at all. The lines had gotten so long and the crowd so thick that you could not tell where one started and another ended. Still, there were biscuits to be tasted. We bought a third and final ticket for our last selections and got into one of the longest lines with an elaborate biscuit at the end of it. The line stretched around the corner and about a block down the side of the building. It was, ironically, kind of a relief to be out of the crush of humanity on the main drag. Eventually, we made it through the line for that biscuit and our remaining spots in our ticket were filled quickly. 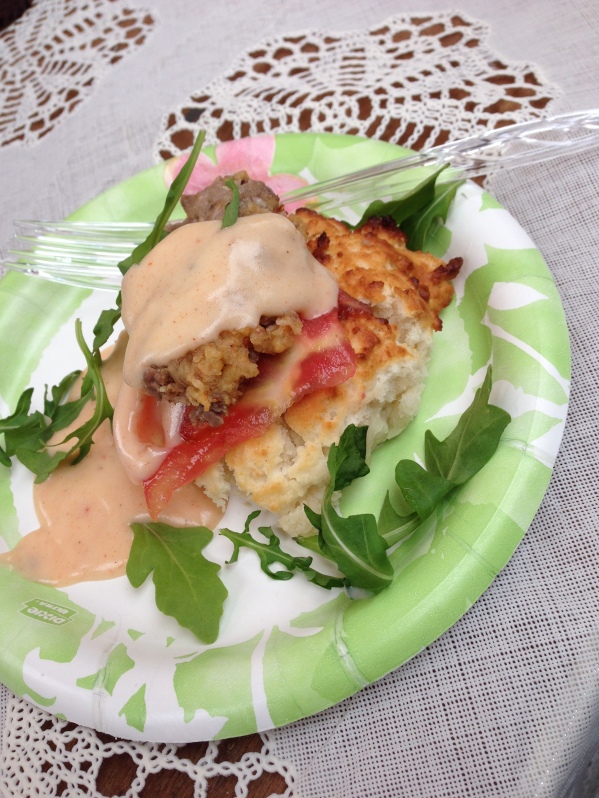 Points for presentation – this one was from Biscuit Head out of North Carolina, I think. Called Country Fried Dream. And it was. 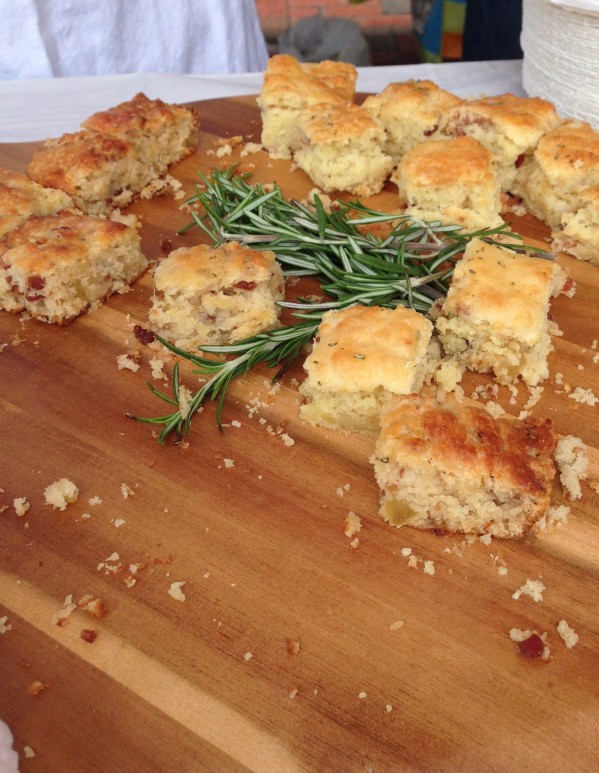 It was called the Hawaiian Hillbilly. I just remember there was bacon involved and some kind of banana jam. Sublime.

After the biscuits, we stopped at the Sprouted Designs booth, since it is owned and operated by M’s cousin. We bought a couple of gifts and then she gifted us with a few towels as a wedding gift, which we will treasure. Such a nice surprise!

On our way out of the festival, we glanced at the booths we had missed. I noticed that this one had a full jar of votes for best biscuit and realized we had probably missed something really good. One more reason to return in 2015!

Terrible picture, I know, but I had to include it. This one won and we did not even get to try it! There was corn, tomato, and Bentons Bacon involved, apparently.

My second favorite biscuit was a little different. Think of it this way. The Green-Eyed Monster was like a fiery redhead, exuberantly gathering all of the attention in the room. The Country Apple Cinnamon Biscuit was like her quiet, intellectual sidekick. No less interesting, but easier to miss. 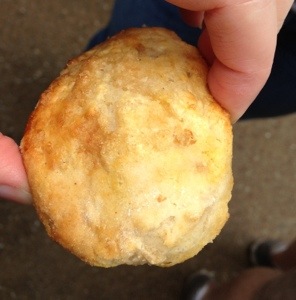 See? It was a little flat and plain. I almost passed it by and my expectations were low. Trust me though. It was wonderful. Light and fluffy, slightly sweet, with just enough cinnamon and a hint of apple. Such a pleasant surprise. This one was made by Latitude 35, a restaurant right on Market Square.

Third place, in my opinion, was somewhere between these two characters, if we’re going to continue my metaphor. Perhaps not the life of the party but everyone’s best friend.

Oh my word. Shrimp Andouille Sausage Biscuit. The biscuit was fine but that gravy was amazing. I’ve never really tried to make gravy before but this both inspired and intimidated me in almost equal parts. If you happen to have a killer gravy recipe, please share it with me! This one was made by Applewood Farmhouse Restaurant.